That’s how data table can be made, use arrays ! 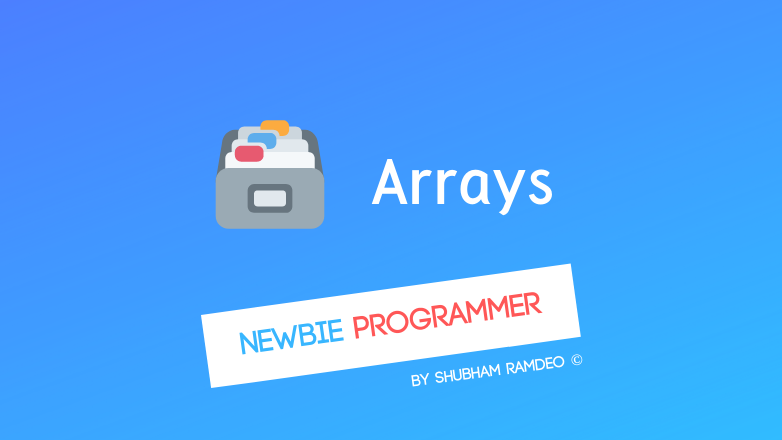 Welcome to the Newbie Programmer series. With the last post, we have ended a big discussion on the program structure. Now let us start a new topic. So if you are new to this series, please go to the index (click here) and read out all the previous parts so that you can easily understand what is going on down below.

Let’s start with Arrays. Arrays are also a kind of variables but are created and used in a different manner.

We have supposed variable as a bag, or a box. A box containing different kinds of balls. That is a simple variable as we have used so far. But now suppose a Big box, containing many small partition. And in each of those partition, you can store balls. That is an array. This example of box and ball is illustrated in this image below.

So Array means table. For example, let’s make a student roll number table, holding the data of their attendance percentage.

So here we have 5 students, and each student is having their attendance value. How can we use such tables during programming in an easy way? Use arrays.

So here we will write :

The above line will create a table, or now we can say an array. The name of this array is ‘attend’. It is holding the integer values. As we have 5 students so the size of this array is 5. The data are listed in order within { and }.

The thing is that in C language, arrays starts from zero.

So here when we use :

Let’s extend this example. Suppose we want to make a program that uses an array to store attendance percentage of 10 students. And in the school, students below 75% attendance will not give exams. So let us find out which roll numbers are not allowed.

We can use loop for that.

In the above program we have made a an array of size 3, so we can have num[0], num[1] and num[2] to store values. We have already assigned the value of num[0] and num[1]. And then used scanf to ask the user to input its value.

In all the above examples, we have considered a single dimension array. We can create two and three-dimensional, even multidimensional arrays.

So to make such multidimensional arrays, you can do something like :

We can represent a tic tac toe position like :

In this, we have created an array of 3 rows and 3 columns, and then given the data.

So I think that’s enough for today. We have discussed a basic introduction of Arrays. In the next part, we will discuss some tricks and tips and some great examples of using arrays for practical life problems. If you have any doubt, just comment below or meet me at social sites.

(prev) « Moving to WordPress - My story !
(next) Arrays some more concepts »