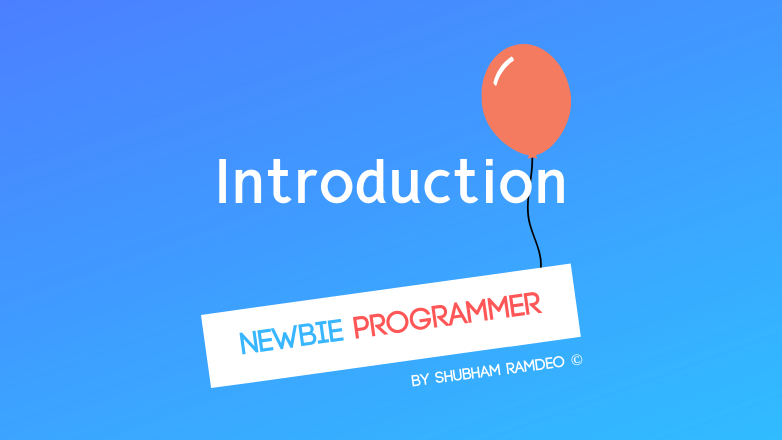 Welcome to the Newbie Programmer Series! This is my original work, for those people who want to learn computer programming from zero but have no knowledge and no background of computer science. People take programming as a mathematical job or as a hard geeky thing and think that only intelligent people can do it but that’s wrong. To learn programming, you don’t need to have a great IQ. All you need is to think like a CEO! You just have to break down the work into simpler steps and manage it. If you know a little bit of additions, subtraction, and some logic then it’s more than enough.

If you want to learn to code from this series then there is no pre-requirement except your own willingness to learn and curiosity.

There are many good reasons for that. Some of them are:

How this all started?

Actually, the story is such that I want to teach computer programming to my cute little sister, but we found no satisfactory content online. So I thought it’s a gap in this world and started filling it. My blog also got a new direction to go. Nowadays, hundreds of curious minds are reading this series daily. Mostly teenagers, students who are going to take the computer as their Major are reading this series to pack with themselves the pre-knowledge. Some are doing it as a hobby. Geeks are always there to learn. And for those who are not yet aware of, we should together encourage them to learn how to code. But I think with your support, we will make this series a great place for everyone to start learning coding.

By the way…, my sister is now no more interested in coding… She took Biology!

Why not other beginner-friendly languages like BASIC or python?

I chose C language as it’s the only language which can teach you how a computer thinks. And also this language is very popular and most useful. With the knowledge of C, you can build anything. It’s simple and easy to learn but can handle any complex issue.

C is fast, C is everywhere. Even if you make a computer game, an antivirus or even to control a machine or a Robot, you can use C Anywhere!

BASIC is easy to learn. I myself started with BASIC and LOGO but the problem is that I don’t know why there was a hard time for me to shift from BASIC to C as we have to learn C due to its superiority. Both python and BASIC are very kid friendly and faster to learn but I believe that we need to learn how a computer would think so we have to learn C. It is a better decision because, after C, you will be having a lot of knowledge about the internals of a computer which will make you a better programmer. Also, most of the modern languages are influenced by C, therefore, we would later feel comfortable with them.

Now and the Future

My lessons are currently teaching most fundamental programming concepts like what a computer itself is, what is a variable, what are loops? Also, I have to teach some basic mathematics and electronic concepts like How logic works with machines. As all these concepts are somehow useful in coding practices and I have started this with a notion that readers would need no pre-requirements so I am doing them as miscellaneous lessons. I also use many analogies to real life things like a variable to a handbag and loops to stadium rounds etc to keep everything as simple as possible.

After doing this basic concept teaching, we will later be covering great things too like game development, artificial intelligence and who knows, maybe Operating Systems?!?!

I am very thankful to all of you who are reading this series and supporting me. It’s all because of you all, this series is taking a form. I always welcome any feedback and comments to make this series better. Please continue to support and reading. And Stay connected…