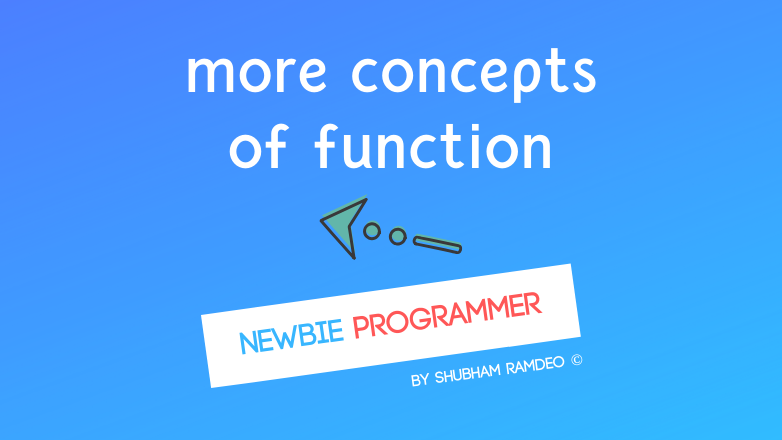 Welcome to the Newbie Programmer Series ! In the last post, we had a basic discussion about functions. Now we know how to declare a function and how to use them. You may revise the previous one (click here). In this post we will discuss some advanced things regarding functions and their usage. So if you are new to this series, please go to index (click here) and read out all the previous parts so that you can easily understand what we are doing down below.

This is again a big post! Please continue reading below :

Heading looks awkward ? Its easy. I have not discussed the void functions in the previous post so I am doing it here. Void or Non Returning Functions are the functions which are not involving and returning any special type of variable.

When we made the add function in the previous post, it was returning the sum of two variables. This sum is an integer so the function become an integer function.

So the above function must be declare as :

A program may have too many functions inside it. But which function will start first ? Its simple, the main() function starts and follows it and all the other functions are skipped if they are not used.

But this one will do:

You may have a doubt that Can the main() function have data types as we are using void, int etc for other functions, is it true for main() true ? And the answer is YES. It does have. I have just ignored it as we are not using command line arguments (learn later).

So in the above function, It is better to replace :

In case it involves numbers, you can use int main() as well.

I have already discussed it in the previous post but let’s go deeper. Functions can be used anywhere. A function inside a function. Like we did with nested if else (click here) Or alone in main function, whatever you want but lets discuss some basic ways :

Can be used anywhere simply as :

If a function is involving some parameters but returning nothing like :

Again it can be used simply like as fav_num(4);

But if the function is returning some value like :

The following function calculates the square for the given number

Then we can use this in two ways. Suppose we want to print square of 4 then inside the main() function :

If that’s only what you want you are to do, Second way is better as we have skipped making an another variable sqr.

Recursion is like using the same function within itself. Well the definition is hard, so its easy to learn it practically.

Now first see the code. Then we will discuss how it works.

WORKING :The main function is simple, it asks a number then print the message along with the factorial which will be using the fact function.

Which is 720. And this value is used by the main function to print the answer.

That’s called recursion but we will do many better examples like Fibonacci Numbers, Summations and even some practical ones as we did here : Some Practical Applications of Control Flow (click here)

I think we have done enough for today, you may play some more. While we will do more interesting stuffs in the next part. So stay connected.