Is it possible to predict future?

Non-technical question. That’s what you are thinking right? Nope! Let me show you some interesting history you might don’t know, which involves mathematics and logic! 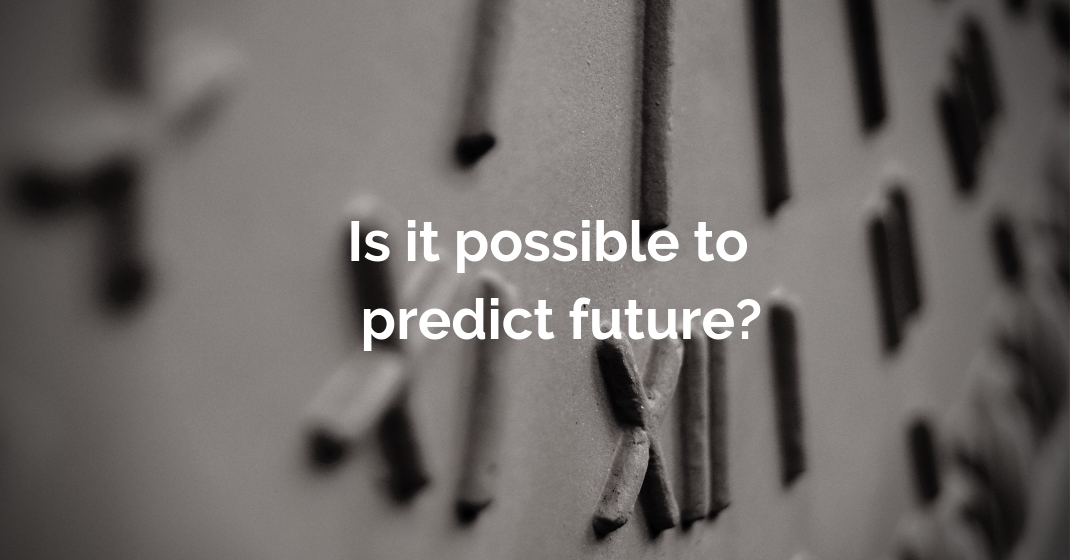 Future telling is one of the most important topics, our civilization has worked for centuries. In the beginning, man finds out that sometimes, dreams and intuitions become correct. But this gives a very religious concept that someone who can predict future is like a god or something with magical powers. No one knows why dreams become true. But there is a very little chance for that. Later it was found that to check the possibility of happening an event, random outcomes can be used! Like to find which team will win the football match, coins were tossed as it has 50-50 chances for both teams, so the team shown by the coin might win. But it is somewhat impractical as there are 50-50 chances for the teams to win, same with the coin and same with the number of coins tossed. So finally decision remains at 50-50. Same with Tarot cards, dice, etc. After the development of science and mathematics, there was an imbalance between above illogical concepts and sci-math. They found that tossing a coin is not a general way as it gives different answers a different number of times for the same question.

Now, an idea came to their mind that there is a relationship between the position of sun and life of us. We get up when the sun rises, sun controls seasons and climates which results in farming and its products which then makes the richness of a farmer dependent on the sun. Using such simple concept on all the known planets, they created a pseudo-science called Astrology. I wonder as at that time when there was no satellite or something, how they could calculate the exact positions of planets in degrees even before Newton’s equations. This was a pseudoscience because it can tell positions of planet mathematically but applying logic to it and predicting something has no scientific foundation. Normally people do not believe in astrology. Even I too didn’t. But when I started exploring it, I found that its principle is that planets are the bigger and nearer to us than any other vast bodies so they play a more major role. But why that’s so? Is their gravitational force or light or something working behind? But as much I can say, an astrologer might be incorrect but astrology is mostly correct ( I am talking about Vedic astrology ).

Now during modern science, it was a direct question on science that whether the universe is deterministic or not. During Einstein’s times, the universe may be considered as deterministic but later after the development of quantum mechanics, the two of its founders Einstein and Bohr used to debate a lot about the nature of the universe and whether its events can be determined.

In quantum mechanics, according to Heisenberg’s uncertainty principle, it is impossible to locate an electron at its exact location. It says that an electron can be at two different places at the same times. That is we cannot predict the exact position, which made Niels Bohr say that Universe can’t be deterministic.

But Albert Einstein made a direct statement on Bohr Saying “God does not play dice” as according to quantum theory, everything happening is random but Einstein believes in god and also that everything is fixed, pre fated. This is Like a thief caught stealing something is fated but still, it must be in jail which another fated event.

Later on, John Conway invented “game of life”, a cellular automaton in which existence of a cell is decided by some simple rules but it gives a variety of results as if they are living cells. It makes an idea that whether our universe is also a software simulation

or something in which our life and future are dependent on a simple mathematical law and which makes gravitation force and other scientific stuff an illusion! Just like the movie Matrix! Currently, physicists are working on string theory which can unify all the scientific models. But… if we are in a computer simulation, it might become useless.

But as scientific theories take time to be shaped, all of the above models might be discarded by a new model which can answer all these questions. So all I can say is that whether future telling is possible, will be shown by a future model 🙂