Open Source in a minute

The more a person get into the world of computing and programming, more he gets to know about Open Source. But how you can join and get started with this cool term? And how to submit your projects and contribute others? Let’s discuss. 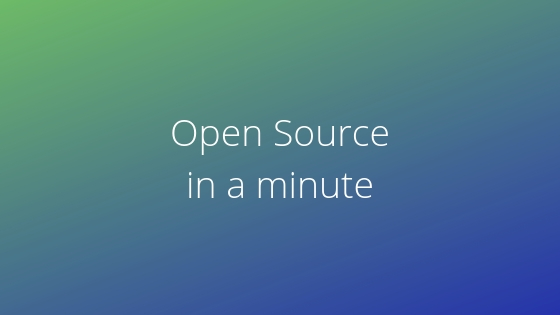 What is Open Source?

Open Source is a way of creating software, without hiding the source code of your software. You release the software with its code accessible. Users can read and modified your code and even distribute their own versions.

This is a software freedom. Richard Stallman exemplifies this as :

A software source code is like a recipe. When we cook something cool, we share its recipe with our friends. So that they can cook their own. They can make a modified version of the recipe. And if they do, they can tell you those required changes so that you can make it better.

Similarly, software’s source code should be made open so that it could be made better, and more and more users can use it.

The Power of Open Source

There is a reason why I added this post in the “social” category. The main thing about open source is not that you can see and modify the source code, the real power is in its collaboration. There are thousands of people working together for a particular problem, adding their own ideas and this creates the overall software very strong. Its well-tested and can solve everyone’s problem. LINUX is the best example. The Android smartphones you are using is a result of this collaboration. People can now have alternatives to other proprietary software and due to this collaboration, that alternative becomes better.

How you can get involved?

Well, there are many ways you can get started with open source, its simple, make a software, make its code available and add some license stating the rights given to the user who is receiving the code, along with the copyrights and trademark notices etc.

Some things that you should take care about :

There are already some great licenses which are very popular and you can use them directly by adding it your code.

Let’s discuss some of the most popular licenses :

There are many many more. I am just giving a little intro about the most popular license. For detailed information, please visit : choosealicense.com and tldrlegal.com. They both provide a great explanation about all the major available licenses.

Well, the best thing you can do to get started from zero is to set up an account at Github, this is a great site to showcase and maintain your project. Here all the users can collaboratively work together and can contribute a lot. You will find a lot of cool stuff being built there.

And so that’s it. We have done a nice intro about the open source movement. Later we will discuss more so stay connected

(prev) « Is it possible to predict future?
(next) What is a Database? »