How technology affected our Lives? Happy being Busy?

I spend most of my time with electronic devices, my smartphone and laptop. Everyone does the same. Because technology has changed the way we solve our problems. Some people are in favor of this, some are against. According to them, technology has made us more disconnected. Even in the same room, on the same table, we have smartphones in our hands. 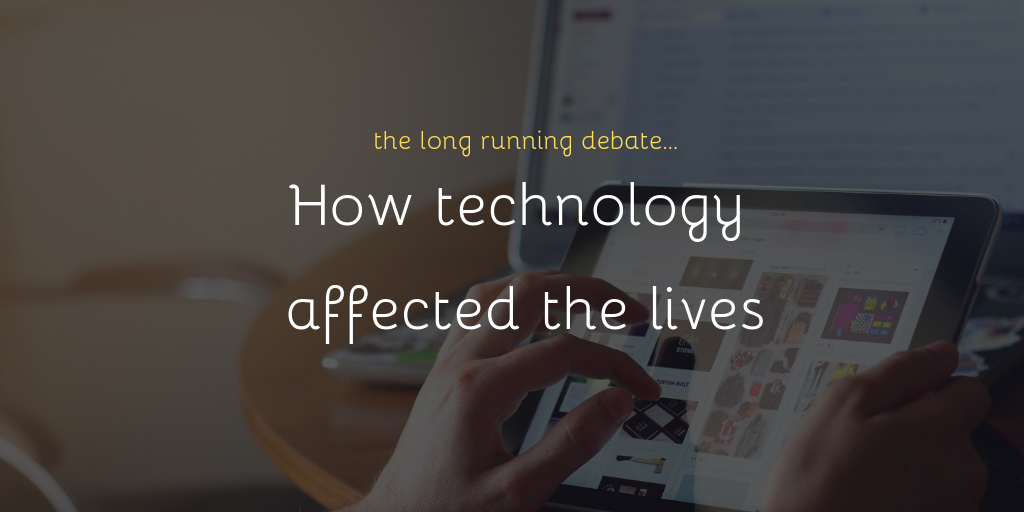 Nowadays we consider chatting more than face to face talking. But is this good or bad? Is technology a solution or addiction? Well, the answer is Yes and No. Because this all depends on the usage. Technology is not a good or bad thing. Our purpose makes it so. Let’s discuss some examples.

The most basic example we can take is of a calculator. We used to calculate using pen paper, or some people use mind only. Countries like India have invented awesome kinds of stuff like Vedic Mathematics to do all the calculation in mind only. Do you know Shakuntala Devi? She had beaten supercomputers of her time, calculating faster than computers, all in her mind!

What I mean to say is that doing calculations manually can make our mind more analytical. It really makes our brain sharper. But nowadays we use calculators and lost all this mind practice. This is bad, especially for the intellectual development of the kids.

So should we stop using calculators and start doing all the numbers in the head?

Again, yes and no, think about large accounts of a bank or a company with thousands of transactions, interests and other dirty economic stuff, how can you handle such large numbers and statistics manually? Also, we will lose a large amount of time and money doing so. In this case, calculators play the perfect role, it saves money and time and is very right. At least, it will not get tired!

Let’s take another example, Emails, and messengers. In older days, for any reason, we used to meet people. We used to greet each other at festivals. Celebrate together. The happiness of a friend to meet his friend at a far-off place was greater than anything. As contact almost goes to zero on separating and migrating, people used to live together. It formed united communities.

Then we got letters. Birth Day celebrations became Birthday Greeting Cards! As people stopped traveling cities, the letter, a piece of paper became enough to put any emotion in writing! ( not only love letters ). And After the invention of Email, contact became sitting on computers, Letters stopped city travelers but emails went further on to stop traveling homes! After the invention of messengers, for an example, in my house, my sister ask me for a glass of water, from just the next room, on WhatsApp! People stopped meeting and talking each due to these services.

So should we stop using them and get back to older times?

Again, yes and no. It’s all because of these mediums that we get any news anywhere as soon as possible. How will a king know if his army needs more food supply during a war? No warrior can leave a war to take such demand to a king, as it’s a WAR going on. So a letter was used. We get a newspaper, books, and other stuff which make us up to date and aware of everything. It is the Email which made it possible for a mother to contact his son who is doing a job at a distant place immediately. And messengers can help that mother to do a live chat with his son.

At least these electronic medias saved a lot of paper. Imagine if you print all of your chats ever done! Electronic communications are really faster. We don’t have to travel so there is no need to wait. We really save a lot of time, money and paper of course!

Lastly, the most discussed topic in this debate is physical activities. Nowadays, people play video games and not outdoor ones. This made kids more fat, unhealthy and unsocial, as playing outdoor games together make you learn a lot of social skills.

But then think, if video games were never invented, a kid, born with physically defected legs will never get any chance to play football. But now we got Fifa on PlayStation!

So it’s all on us. Technology is not good or bad. It’s a feature. It’s on us how we use them. When Einstein found E=mc2, we used his theory to make an enormous amount of energy that brought light and electricity to a lot of poor villages, without light, how would a kid study comfortably in the night. But then we made Atom Bombs too! So you see its on our use. One use brought life to villages and one took them in wars!

Technology must be used on its necessity. I mean, like for calculations, companies should use calculators and kids should do manually. There should be more talking inside family while using emails for sending urgent important stuff to someone living very distant from you. Video games make our brain sharper but we should check if that is making our poor or not. If we use them on the basis of their necessity, its a better a great thing.

I don’t write a magazine. I have an online website, a blog. So I save paper, my money to publish and your money to buy it. And also a lot of time. You can read when you want and I can write when I want!

So I believe now that you can understand that every discovery ever made in science and technology is neither bad nor good. Its all on our use. And so, instead of making it a debate topic as I had in my schools in competitions as “Technology a ban or boon”, we use the debate on its use.

(prev) « BASIC, the Programming language that made it all fun!
(next) 7 Reasons why you should use GitHub Pages »